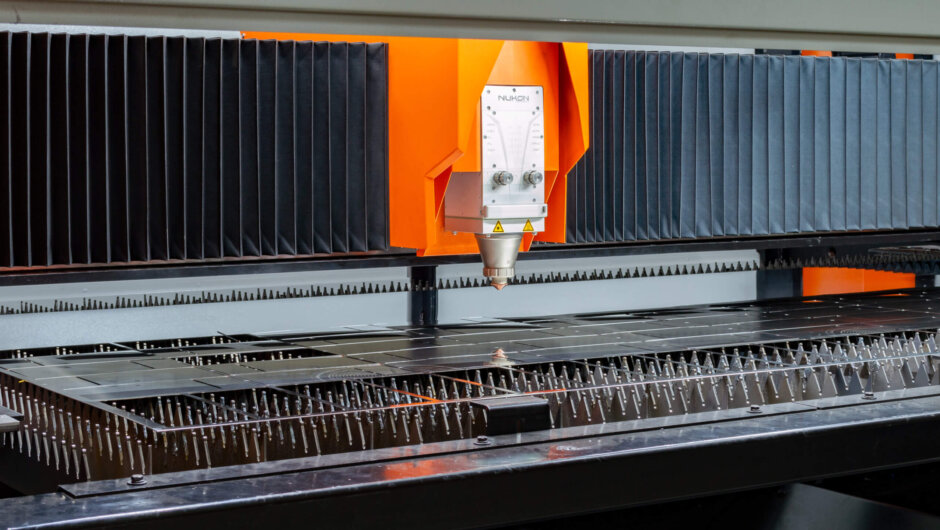 The fiber laser is a great innovation in laser cutting, not just for its superior speed but for its wavelength. The CO2 laser beam has wavelength of 10.6 micron and for a very long time it was a great way to cut ferrous metals. But when it comes to nonferrous materials there is a big problem – optical reflectivity. Copper, brass cutting with a CO2 laser is rare, but some determined fabricators can accomplish it.

Cutting aluminum with a CO2 laser is not uncommon at all. But the CO2’s 10.6-micron wavelength is not ideal. That does not make the process impossible, rather really, really hard.

Fiber lasers have a wavelength of 1 micron. Most metals in the fabricator’s shop absorb more and reflect less of that 1-micron wavelength in comparison to the 10.6-micron wavelength. This makes cutting aluminum, brass, and copper easier too.

But it is not JUST about the wavelength. When you want to cut nonferrous metals, you must take into account some other components too – power density, beam focusing, kerf width, and the assist gas type and flow rate. When all these components are mixed properly the results are amazing cutting speeds and clean cuts.

If someone says that something in laser cutting is impossible or impractical, chances are a fabricator somewhere has made it both possible and practical. If you want to cut a 3mm thick copper alloy using a 2.5 kW CO2 laser you can move the cutting head slowly and stop the cutting cycle midway through to let it cool. It is not ideal but it is doable.

Laser cutting nonferrous materials has always had a lot of problems. The process is less efficient due to the low absorption rate of the material. Also, cutting reflective material poses the danger of back-reflections through the optical system, going all the way back to the resonators’ cavities and destroying them. 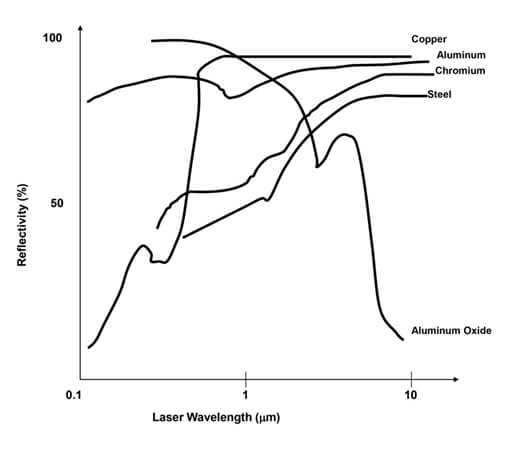 The difficulty when cutting aluminum is to make a clean cut with minimal dross. With the proper assist gas, delivery, and flow, you can minimize the generation of dross.

Low viscosity becomes a major contributor to dross buildup, particularly if the melting temperature of the material is relatively low, as with aluminum.

Some cutting challenges have to do with melting temperature, especially when it comes to the thin layer of aluminum oxide (Al2O3) film, which forms on aluminum’s surface as it’s exposed to the atmosphere. The film prevents further corrosion, but it also complicates the laser cutting process.

Aluminum melts at about 650°C; the aluminum oxide melts at roughly 1700°C. The high melting point of the aluminum oxide film formed on the surface of molten aluminum droplet causes it to solidify very quickly around the still molten droplet, so it is very important for the assist gas to flush it out quickly before it resolidifies. If it is not flushed quickly enough, it forms stalactites on the bottom edge, also known as dross. The good news is that, compared to dross from material like stainless, aluminum dross is generally soft, so soft that many operators can comb it away with their thumb.

Historically, operators cutting aluminum with a CO2 laser faced several challenges that made cutting more inefficient: high reflectivity of the 10.6-micron light beam, as well as aluminum’s high thermal conductivity leading to more heat conduction loss. In fact, all the heat loss forced many operations to deal with thermal expansions in the sheet, sometimes writing the cutting program so the head moved alternately from one quadrant of the sheet to another, equalizing the heat effects.

All this said, the fiber laser’s power density and, again, 1-micron wavelength have really changed the game. Aluminum’s thermal properties haven’t changed; it still has high thermal conductivity. But it also absorbs more and reflects less of the energy from the 1-micron laser beam. This, combined with the high power levels, power densities, and speeds offered by the modern fiber laser beam, has improved laser cutting performance substantially.

Laser cutting aluminum with nitrogen assist gas or compressed shop air (which can work for thin stock) fosters a similar cutting action as other alloys cut with nitrogen. Vastly oversimplified, it’s all an interplay among thermal energy from the beam, feed rate, the resulting kerf width, and the assist gas flow that flushes the molten material out of the kerf. Perfect the assist gas flow so it plays well with the heat (focus and beam characteristics), cutting speed, and kerf width, and you achieve a quality cut edge with minimal striations and dross. 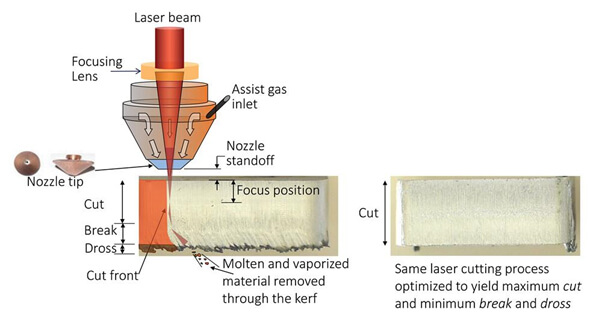 Traditionally, aluminum usually calls for a beam focus that’s deep under the surface of the material, particularly as the material gets thicker. This helps flush the material out the bottom of the kerf. To understand how and why this occurs, visualize material being melted at the top of the kerf, this time with the focus spot at or near the material surface.

The material melts quickly and then flows through the kerf, where the beam diverges and the energy density drops quadratically. Hence, less energy is available at the bottom of the kerf to the molten metal, making the metal oxides freeze into dross.

Set the focus low beneath the material’s surface and the power density situation changes. As the molten material from near the material surface travels down the kerf, it passes through the brightest section of the beam and, hence, remains a liquid until it is evacuated out the bottom.

Travel speed also affects the kerf width. A slower travel speed creates a wider kerf, while a faster beam creates a narrow kerf. As your kerf narrows, you have difficulty bringing the assist gas through, and you don’t achieve as much flushing power. This in turn affects cut quality, including dross.

Edge striations also change with cutting speed, along with other variables. Cut aluminum (and other material) too slowly, and you see deep striations. Those represent evidence of a stream of gas pushing and flushing liquid metal.

All this interplays with yet another variable that isn’t considered very often: the speed of the gas flowing out of the nozzle. It’s supersonic and, like anything that travels faster than sound, generates small shock waves. This shock wave can deflect the flow of assist gas from where you intended it to flow and it can disrupt the amount of gas you have flowing through the kerf.

If shock waves deflect above the kerf, they form a partial barrier that hinders the column of assist gas, which in turn alters the gas dynamics in the cut and could affect the ability of the gas to evacuate the molten metal effectively—hence, you get poor cut quality. The likelihood of this becomes greater as the kerf width narrows.

Because gas flow is supersonic, laser cutting operators can’t eliminate the shock waves, but they can make them less detrimental to the cut by setting the nozzle standoff distance properly. The rule of thumb is that the standoff distance should be equal to or less than the nozzle orifice diameter, Caristan said. Go higher, and you exacerbate the shock wave deflections that could yield less gas to actually make it into the kerf.

The focused beam propagation and energy distribution are complex subjects, but when thinking about focus, imagine the laser beam as two cones, one on top of the other. Where the cones’ tips meet is the focus spot. The shorter the focal length of the focusing optic, the fatter the cones, the smaller the focus spot size, and the greater the power density at the focus point.

The focus point size changes with the wavelength, so when the beam itself is made of a shorter wavelength, the power density at the focus point increases quadratically. That high focusability, and how well various metal grades absorb energy from fiber laser beams, is part of what makes the fiber laser so effective.

It’s one reason you have the rule of thumb—that for certain materials and material thicknesses, each kilowatt of a fiber laser has cutting performance equivalent to double that of the CO₂ laser of the same power.

In laser cutting, more power density creates more heat energy, and how much energy depends on how well a metal, including aluminum, absorbs the energy from the laser beam. But this is just part of the equation.

Molten metal needs to be evacuated. A short focal length of the focusing optic means that the power density drops dramatically as you move away from the focus point position. This narrows the kerf, and it also means the focus spot has to be in just the right place, especially as the metal gets thicker. The narrow kerf can make it difficult for the assist gas to cleanly evacuate the molten metal.

A focusing optic with a short focal length makes the beam diverge quickly past the focus point, so by the time you get to the bottom of the kerf, you have very little power density, relatively speaking. This is one reason that setting a deeper focus point position (within and not on top of the material) on thicker aluminum has been a common practice.

One of the advances the industry has seen in recent years is to decrease the effect of this drop in power density. You can’t change the physics of laser beams; they all converge into and diverge out of a focus point. Even so, other beam characteristics can be changed to produce a better cut edge. 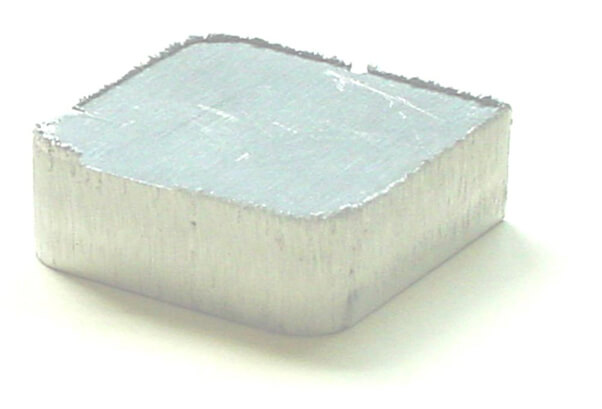 Aluminum dross is so soft it can often be combed away by the operator’s thumb.

But again, energy from the beam is only half the equation; the effectiveness of the assist gas flow is the other half. Here nozzle technology has played an important role. Some nozzles now actually have components that touch the workpiece surface. These reduce the wasted assist gas that never makes it into the kerf, which is a particular issue with the narrower kerf produced by the fiber laser.

A shop using a laser to oxygen-cut thick mild steel takes advantage of the chemical reaction between oxygen and iron. For cutting thicker aluminum and other nonferrous material with nitrogen, it’s all about melting and evacuating the material cleanly.

An “ideal” laser setup is one  with assist gas flowing in a perfect laminar fashion into the cut, with a beam that removes and flushes material cleanly—no “freezing” prematurely at the bottom (dross) or on the edge (striations). The supersonic shock waves are there, but they move in a fashion that they don’t deflect away or obstruct the flow of gas into the kerf.

These days high-powered lasers cut extraordinarily quickly, but all that speed doesn’t have an impact if the resulting parts need to be reworked or scrapped. The industry has come a long way in understanding exactly how the laser cuts metal. The better that understanding gets, the better cutting parameters can become, and the better chance an operator has of achieving a clean-cut part on the first try. 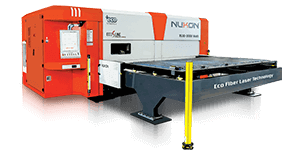 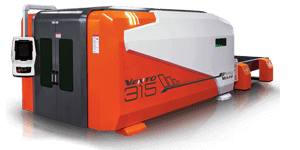 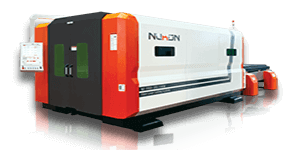 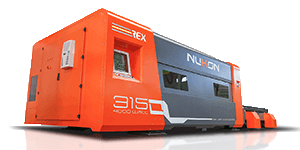 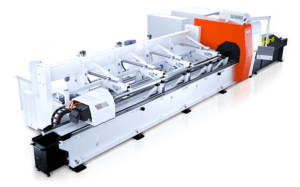 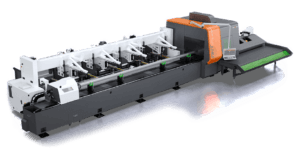